It’s safe to say that even though this is only our second day working at the station, it already feels like a second home (and the tea and coffee kindly provided by Elspeth certainly doesn’t break that illusion!)

Today called for an early start, so we met at the station at 9, and began work almost immediately; yes, today was MOSAIC DAY! As ‘communications officer’ I quickly laminated some posters that I made yesterday, and put them up around the station to inform station-goers of the work that we were doing, and by the time that I arrived in the subway, the mosaic was already well under way.

Someone even decided to comment ON one of our posters

With the subway closed, and music softly playing, the morning whirred past in a blur or adhesive, tile cutters and notched trowels, and by the time we staggered our lunch breaks, we had produced better work than, honestly, I thought was possible in the time we had. 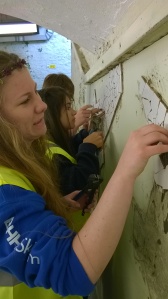 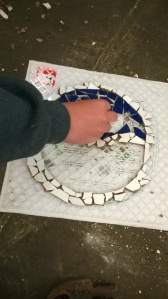 (To be clear, in the first picture I asked Izzy to pull a silly face)

After lunch, we carried on with the mosaic, altering the design slightly due to the change in the amount of space that we had to cover. However, I think that the block colours at each end of the mural, twisting and fading into the waves of rainbow stripes that we had originally designed give a more pleasing aesthetic, and allow the mosaic seagulls that we’d worked all morning on to really shine. 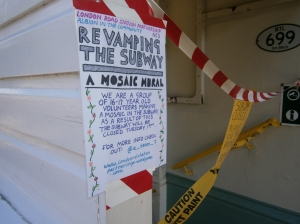 It’s been a fantastic day, and I can’t wait to continue (and finish!) the mosaic tomorrow!

If you want to keep updated about the work that we’re doing with LRSP and Albion in the Community, keep watching this blog, and you can follow us on twiiter @a_team_7. Thanks for reading- Orla

This entry was posted in Uncategorized. Bookmark the permalink.

1 Response to Volunteering at LRSP: Day 2