Celebrating the mosaic – the tea party

Posted on October 2, 2014 by londonrdstationpartnership 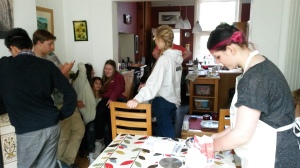 It’s over a month ago now, but what a fantastic event it was. To celebrate the completion of the underpass mosaic, the ‘A-team’ National Citizen Service volunteers and members of LRSP organised a tea party at London Road Station.

One group of 16 year-olds made cakes – as always with a fruit and vegetable theme -, another group completed the wooden surround for the tree pits, having learned from Chris how to use an electric drill, while another group put finishing touches to the mosaic.

Over 30 people turned up for the party: neighbours, friends and parents. Our ward councillor, Mike Jones, was there and talked afterwards about the ‘inspirational and enjoyable event’. He was, he said, ‘delighted’ by the mosaic which was so unexpected. So many people have commented similarly, and we’re told that some station users now deliberately use the underpass.

We really enjoyed hosting the A-team. Some learned to use an electric drill, others used a food processor for the first time, still others learned old fashioned vocabulary from us such as ‘hoe’ and ‘urn’. But most importantly, everybody saw how a creative vision – ambitious but uncertain at the start – could actually be achieved. On the Tuesday, they didn’t think they could bring it off: by the Friday, the mosaic – all 7.5 x 2 metres – was complete. We love it – thank you!

This entry was posted in Events, Video. Bookmark the permalink.